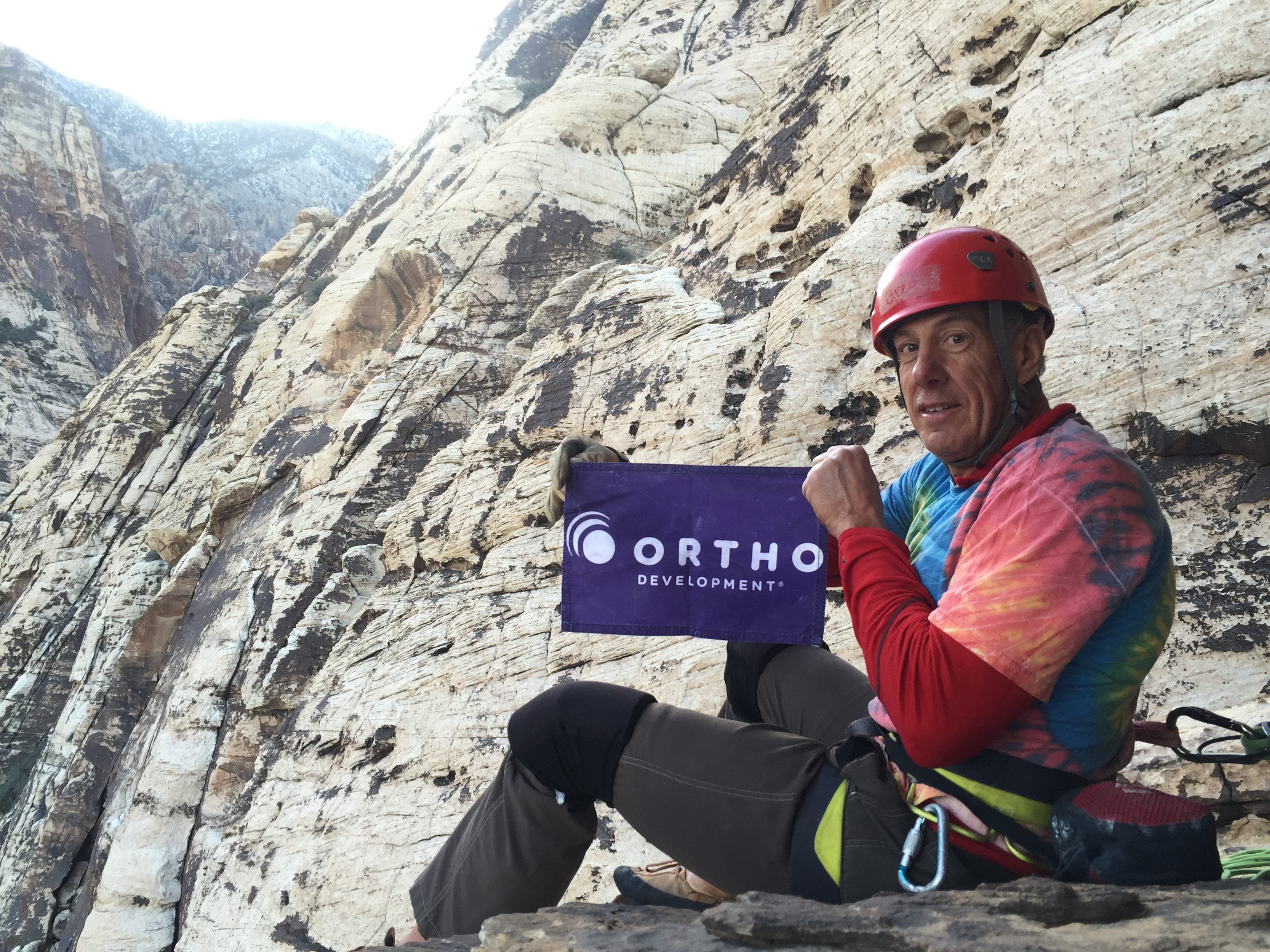 DRAPER, Utah, May 4, 2016 - Greg Paul, a 61-year-old mountaineer from Alpine, Utah, is attempting to become the first known climber to summit Mount Everest with two total knee replacements. Ortho Development® Corporation, the device manufacturer of Paul’s knee implants, is one of the sponsors for his Everest summit attempt.

“Our mission as a company is to help people do what they love by restoring mobility,” said Brent Bartholomew, President of Ortho Development. “We are sponsoring Greg because he is an inspirational embodiment of that mission. Helping Greg reach his goal of summiting Everest is symbolic of what can happen in the life of every person out there who can no longer do what they love because of joint pain. We are proud to have designed and manufactured the knee replacement implants right here in our Utah factory, that will help a fellow Utahan reach the top of the world.”

This is Paul’s third attempt to summit Everest. His first try came in the spring of 2012 but that ascent was called off by his guides due to extreme weather that included avalanches, rock slides, and poor route conditions. Two years later, Paul was again at Everest base camp preparing for his second chance when a deadly avalanche claimed the lives of 16 people, shutting down the mountain. After two disappointments and a powerful earthquake that devastated the region last year most people would have given up, but Greg is not like most people. “I want to finish what I started in 2012,” Paul stated. “I don’t want to have that feeling of never knowing whether I could have made it to the top of Everest.”

Paul had his first total knee replacement in 2008 after the pain in his right knee became so severe that it was interfering with his everyday routine, not to mention his ability to do the things he loved like mountain bike, ski, and climb. “After my first knee replacement I was able to get back to the things I live for,” Paul said. In late 2012, Paul underwent a replacement of his left knee, thereby giving him a bilateral knee replacement.

With Ortho Development’s Balanced Knee® System in both of his knees, Paul feels confident about his Everest summit attempt. “There are a lot of other things to worry about like your hydration, your state of mind, your overall physical conditioning, your teammates, or the weather; so to be worrying about something like your knees is not what you want to be doing when you are on the highest mountain in the world where a lot of other things can go wrong. I am not worried about my knees anymore,” Paul stated.

Paul has been in Nepal since the last week of March acclimatizing himself and making preparations for his chance at the top. Each year there is typically a short window of calm weather in the Everest region during mid-May when most summit attempts are made. “My training has specifically been preparing me mentally and physically to take on the rigors while in the infamous Khumbu Icefall where being well prepared can be the difference between life and death,” said Paul.

E. Marc Mariani, M.D. and Benjamin J. Hansen, M.D. from the Salt Lake Orthopaedic Clinic in Salt Lake City, Utah performed Paul’s knee replacement surgeries. Dr. Mariani observed, “If Greg can make it to the top of Everest with two total knee replacements it would be a real testimony not only to Ortho Development Corporation, but to the orthopedic process and what the orthopedic industry as a whole has been able to do to let people get back to the things they enjoy doing.”

Paul is chronicling his Everest summit on his blog www.gregclimbing.com and on social media platforms. To learn more about the Balanced Knee System please visit www.odev.com.